With the leadership of the NATO Allied Command Transformation‘s (NATO ACT) Operation Experiment (OPEX) branch, DroneUp worked with local partners Pale Horse Weapons Institute (PHWI), WeaponLogic, DanielDefense, and Ultimate Training Munitions (UTM) to execute the development and demonstration of a much-sought capability—autonomous last-mile resupply in Brunswick County, VA. The goal: get the right ammunition to the right operator at the right location via autonomous drone delivery. Sounds simple, right? However, despite repeated testing, no group has succeeded until now.

Using the company’s proprietary delivery ecosystem platform and industry expertise, DroneUp conducted the exercise using real-world operators in a tactical training scenario, each with a unique type of training ammunition that needed re-supply. This unique supply request variable establishes a precedent that goes far beyond mixed ammunition. One could immediately apply the technology to the delivery of medical supplies, including sending specific blood types to the right individuals. Let’s walk through why this is such a big deal and how it applies to the future of both battlefield and homefront community ecosystems.

The intricacies of supply chain management and the rapid deployment of supplies on the battlefield are challenges identified throughout history. The possibility of making resupply autonomous has been a continued focus of NATO, but I’ll first paint you a picture.

In real-world scenarios across centuries of time to modern-day, troops are sometimes stuck for days in areas unreachable by traditional re-supply and recovery methods. These traditional methods involve significant added risk to health and safety due to the use of manned air or land vehicles and bringing additional people to the frontlines. Additionally, factors limiting movement or access such as terrain, proximity to adversaries, and uncertainty of location often prevent resupply or medical evacuation of casualties.

In response, NATO has prioritized the development of low-cost autonomous systems for delivery of the specified payload to identified individuals under field conditions.

The capability has been of critical strategic focus for some time, due to the capacity to absorb losses that the traditional manned systems cannot. As a low-risk, high-value transformation, improvements will be immediately recognized through reduced combat casualties, more rapid medical care, and greater operational effectiveness. When eventually implemented broadly at scale, logistics and transportation systems will see reduced waste and increased pace of operation. To put it simply, it will essentially lead to an unlimited force multiplier, and at a greater velocity.

If this is such a critical capability, why has no one been able to execute it until now? It could be said that some challenges require a response team with abilities beyond linear industry-specific domains, and NATO’s Operational Experimentation branch (OPEX) leading this initiative, had the wherewithal and leadership to assemble a task force with just the right amount of diverse experiences and grit to accomplish this novel capability.

When called to action, DroneUp responded with the team’s unique expertise in drone and military operations, supply chains, and software development and integration. Further, the proven drone delivery capabilities of DroneUp—demonstrated through deliveries in partnerships with the UPS and now Walmart and Quest Diagnostics—allowed the team to accelerate the path to innovation with knowledge and experience gained from prior lessons learned.

The autonomous last mile resupply solution was demonstrated to distinguished guests of NATO with an enthused response. To prove the viability of the solution, a team of operators in a field-firing, open environment, used colored submunition (training)  rounds with a unique color assigned to each operator. Once the submunition was expended,  an operator sent a resupply request through a single button press embedded on the uniform. In less than a minute an autonomous drone appeared overhead and dropped the resupply within arms’ reach of the operator. Once reloaded, the capability was a proven success through evidence of each operator’s targets colored with their assigned color. 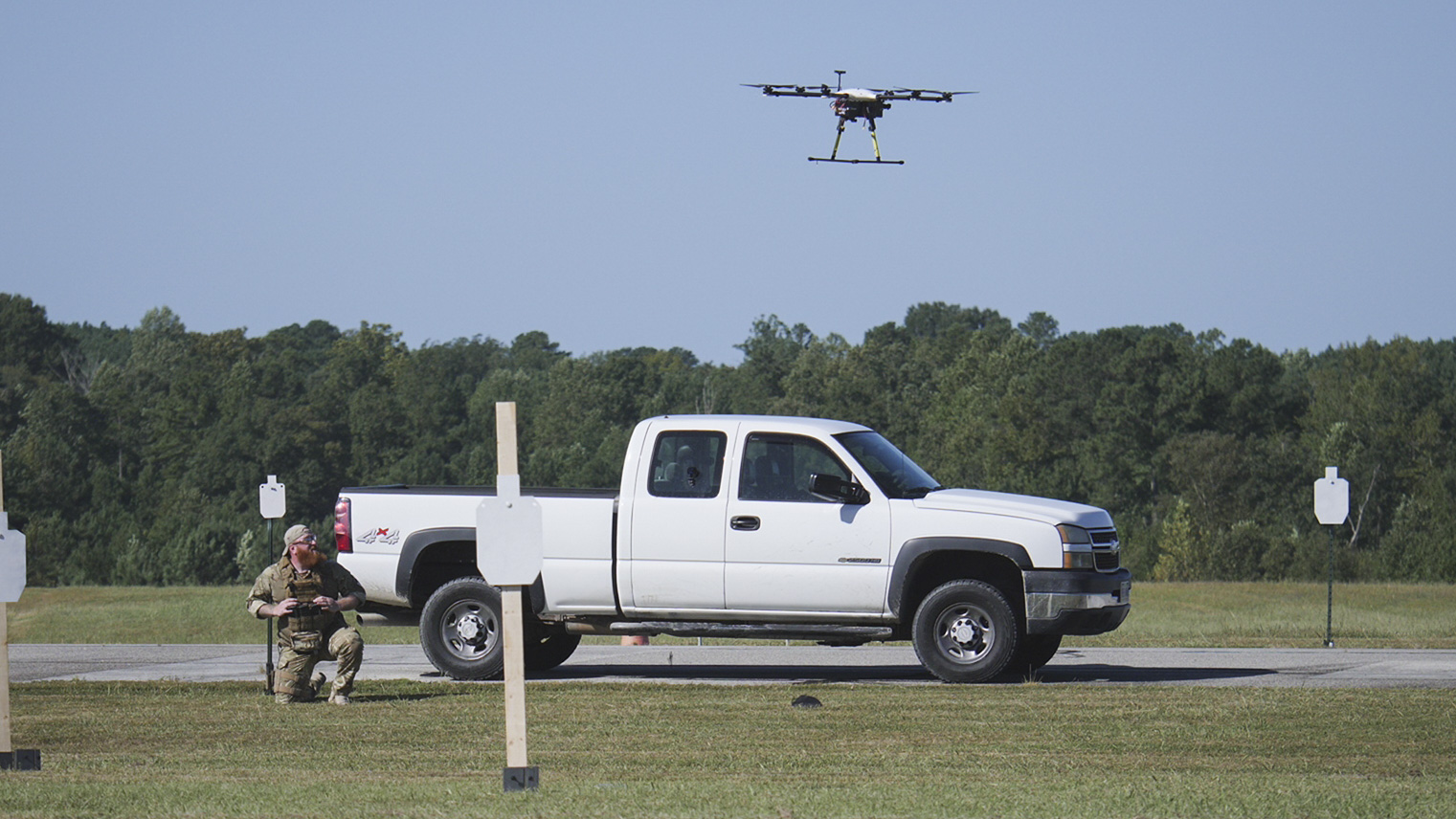 DroneUp’s patent-pending Combat Drone ServicesTM delivery platform was utilized as the core to the solution and was critical to fulfilling the need for an open-loop system to support the dynamic and open environment of the battlefield. This proprietary technology is agnostic to the device or mechanism used to activate the delivery request – a framework decidedly designed as an open opportunity model for future innovations.

The platform manages to process the request—the individual person, their GPS location, and the item needed—as well as mission coordination and execution.

It may surprise you how many of today’s everyday items and processes started on the battlefield. Emergency room procedures, railroads as a critical part of an efficient logistics ecosystem, canned food, duct tape, and even microwaves all owe their creation to wartime.

This innovation is positioned for the same trajectory. It should be noted that the operational benefits to be gained discussed in the challenges of today’s battlefield are all prevalent in the civilian environments; in public and private sector organizations looking to extend and improve the capacity of their workforce. In the face of the life changes from the COVID-19 pandemic, autonomous delivery in the consumer space for retail and food has received a lot of buzz due to quarantine, social distancing, and the workforce gap.

DroneUp is very excited to have contributed to such a successful strategic initiative of NATO’s 30 alliance (member) countries and 14 partner countries and looks forward to future partnerships to collaboratively continue to transform drone delivery technologies.