In September of this year, DroneUp partnered with Walmart and Quest Diagnostics to deliver at-home COVID-19 test kits. The ongoing work pushes the drone industry towards a new frontier, but it wouldn’t be possible without the talented pilots.

We had an extensive search and interview process to select the pilots, knowing that the challenging tasks required an incredible work ethic and drone experience. Utilizing DroneUp’s Flight Operations and Training teams, we brought the pilots up to speed and got them behind the delivery platforms’ controls.

For this month’s installment of Drone Jobs, we spoke with some of the pilots we hired to assist with our operations in North Las Vegas. Read their stories below:

One way in which Linda differs from many of the pilots we’ve spoken to for Drone Jobs, Linda did not have a lifelong fascination with drones or RC vehicles, and she had no experience in aviation until just a few years ago. Linda was often on worksites sites shooting construction progress photos, and one day a contractor asked her if she worked with drones. That very day, Linda began studying for the Part 107 exam. She hired a local drone pilot to come out and help her on her first flight.

That same client hired her for her first job on a warehouse construction site. Ongoing work with the client proved challenging but rewarding, and drones have been an integral component of her business ever since.

She saw the call for pilots for the Walmart operations and was immediately interested. Despite the Vegas heat, which she insists is “relative,” she feels lucky for her opportunity to be involved.

“I’m very blessed I was selected,” she said. “I’m excited to be a part of it, and knowing the work I’m doing is contributing to a great project, and I’ve enjoyed working with all the other pilots on the team. 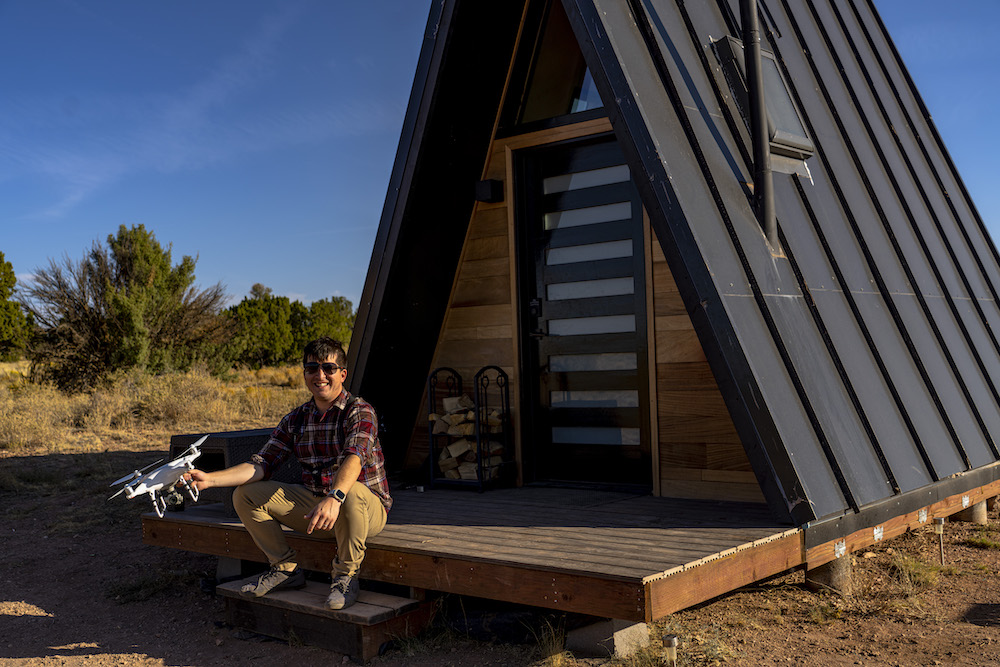 Andrew didn’t dive straight into drones right away. When he was younger, his brother always flew RC planes around and found it annoying. It didn’t take long, though, for that annoyance to turn into interest, and many years later, Andrew found himself in Hong Kong at a flagship DJI store. He bought himself a DJI Spark.

Before long, he wanted to distinguish himself and bought an Inspire 2. He was flying small jobs on the weekends while networking with pilots throughout Vegas. His primary work was in the convention industry, working to prep, run and break down events in the many spaces throughout the area. Then the pandemic hit, and the sector froze.

The construction industry, on the other hand, was doing just fine. Andrew started doing construction progress reports, like Linda, but this opportunity to work with DroneUp reached his inbox. It both being stable work and also on the cutting edge, he responded and was ultimately selected to participate.

“We’re making history doing deliveries with these drones under Part 107,” Andrew said. “The first delivery was a breakthrough moment. I thought ‘We can systemize this and make it work.’”

For a long while, Chris worked in the shipping industry, managing vessels in and out of the ports of Long Beach and Los Angeles. He got a change of scenery when he moved to Las Vegas but kept up the work. After a few years, he sold the business and quickly got tired of sitting at home.

He attended an Interdrone and Commercial UAV Conference and was immediately interested. He’d used to be into motocross racing, and drones seemed like a much more responsible new hobby. He devoted an increasing amount of time to it, eventually making it into a job. COVID-19 mostly brought that to a halt until this opportunity to work with DroneUp and Walmart showed up.

“It was a ‘Pinch me, is this real?’ moment,” he said. “I’d been offered some other jobs, but once I learned all about this, I had to do it. I was willing to do whatever it took to make it happen.”

Chris says he grew up in the ‘age of beepers’ and that his first computer was a Commodore 64. The technology is why he’s been impressed with the operation thus far, but it also has to do with the people.

“Seeing it from the start and watching it evolve has been amazing,” he said. “Especially with the things we’ve been doing with the packaging. It’s nice working with people who are able and willing to think—it’s nice not being the smartest guy in the room.”

“If there were a full-time position as a drone delivery driver, I’d be interested,” Chris said. “For someone like me, I’m genuinely excited to get up in the morning and come out here.”