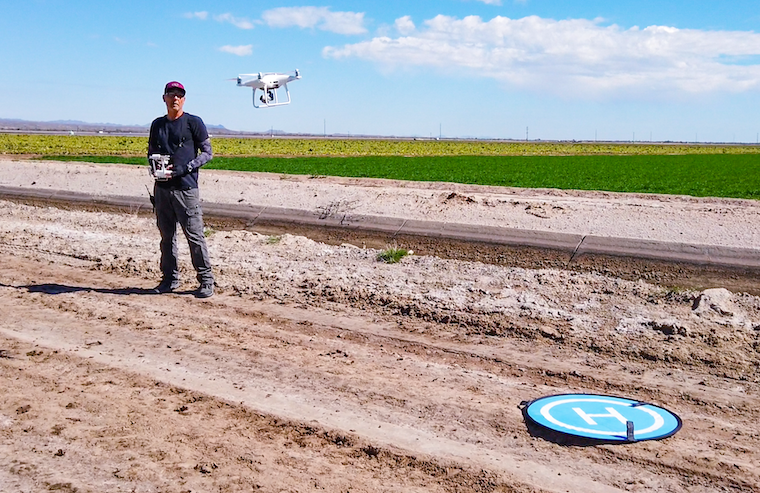 When we reached Jon Starheim, he and his wife Angie were up bright and early in Yuma, Arizona, around 250 miles from their home in Huntington Beach. They were months into—and weeks away from completing—work for GeoVisual Analytics, which had Jon flying a custom-fitted DJI Matrice 600 over fields of leafy greens.

This interstate trip for drone flights is not the first for this crew, who operate under their business Droneographers. For years now, they’ve gone wherever the work takes them in their “mobile ground station” van as a part of their “road warrior” business drive.

Agricultural data is now a cornerstone of their business, and that has been an evolution. Surprisingly, one of the greatest phases of that evolution turned out to be a focus on leafy greens. They found that thanks to the need for these crops to stay under 85 degrees, Jon and Angie have been able to stay out of the most sweltering parts of the Southwest. They nearly threw in the towel on agriculture flights after surveying the largest pistachio farm in the country.

“It was hotter than Hades,” Jon said. “I told Angie ‘We’re never doing this again when this contract ends.’ Now, I absolutely love it and it’s because I’m flying romaine, broccoli, iceberg, celery, strawberries…It’s never going above 90 [degrees] again.”

It’s during this work that they were called upon by DroneUp, who needed a pilot with cinematic chops and equipment to capture television-worthy drone footage for the Canadian Broadcasting Corporation. The CBC was doing a story about romaine lettuce farming in Arizona, and thanks to DroneUps’ Mission Match platform, the perfect pilot was tapped and brought in.

For the two of them, the work turned out to be “one of the best jobs we’ve flown so far.”

“Me and my wife had a freaking blast,” Jon said.

Doing his favorite type of drone work, cinematography, Jon was flying at low altitudes and high speeds, capturing stunning images of rows and rows of produce. Of course, he was flying as safely as he could, but the directors wanted to be wowed. In sport mode, zooming at 40 miles-per-hour, inches above the greens, Jon was piloting a “heart-racing flight.”

That’s exactly what he’d hoped for when he decided to make a career out of being a drone operator. He wasn’t a stranger to the tech side of it—in fact, he’d worked extensively in fabrication and robotics as an “engineer without a degree,” going so far as to assemble offroad racing trucks for a family business.

“That was the gap between playing around with R/C planes as a kid and getting into this drone business,” Jon said.

Like many of previously featured Drone Jobs pilots, Jon was racing R/C cars and planes as a kid and the fascination never faded. That probably had something to do with why his wife bought him his first drone a few years ago—a drone he promptly crashed into the South China Sea.

Luckily for DroneUp, he bought and crashed nearly 20 more “toy” drones before graduating to Typhoon Yuneec in 2015, which is around when the commercial work began. Working as a contractor building homes, he decided he could be taking real estate images with this drone as well. He got licensed, Angie built him a website, and more-and-more drones became a cornerstone of his business, eventually taking over.

It certainly seems like there’s no going back, now, for the two of them. Whether it’s zig-zagging up the west coast driving 4,500 miles in a matter of 11 days to inspect cell towers or zooming over crops in Arizona, the “road warrior” duo is “getting their slice of the pie.”

“That’s what we do, and we love this stuff,” Jon said. “You should see some of the photos. Me standing at the top of Olympia National Park in Washington—I’ve never gone there in my life, but this job took me there. This job has taken me all over; small towns, big cities, deserts, forests, beaches, mountains. When I was breaking my back as a contractor building other people’s beautiful kitchens all I thought was ‘I want to fly drones and I want to travel.’”