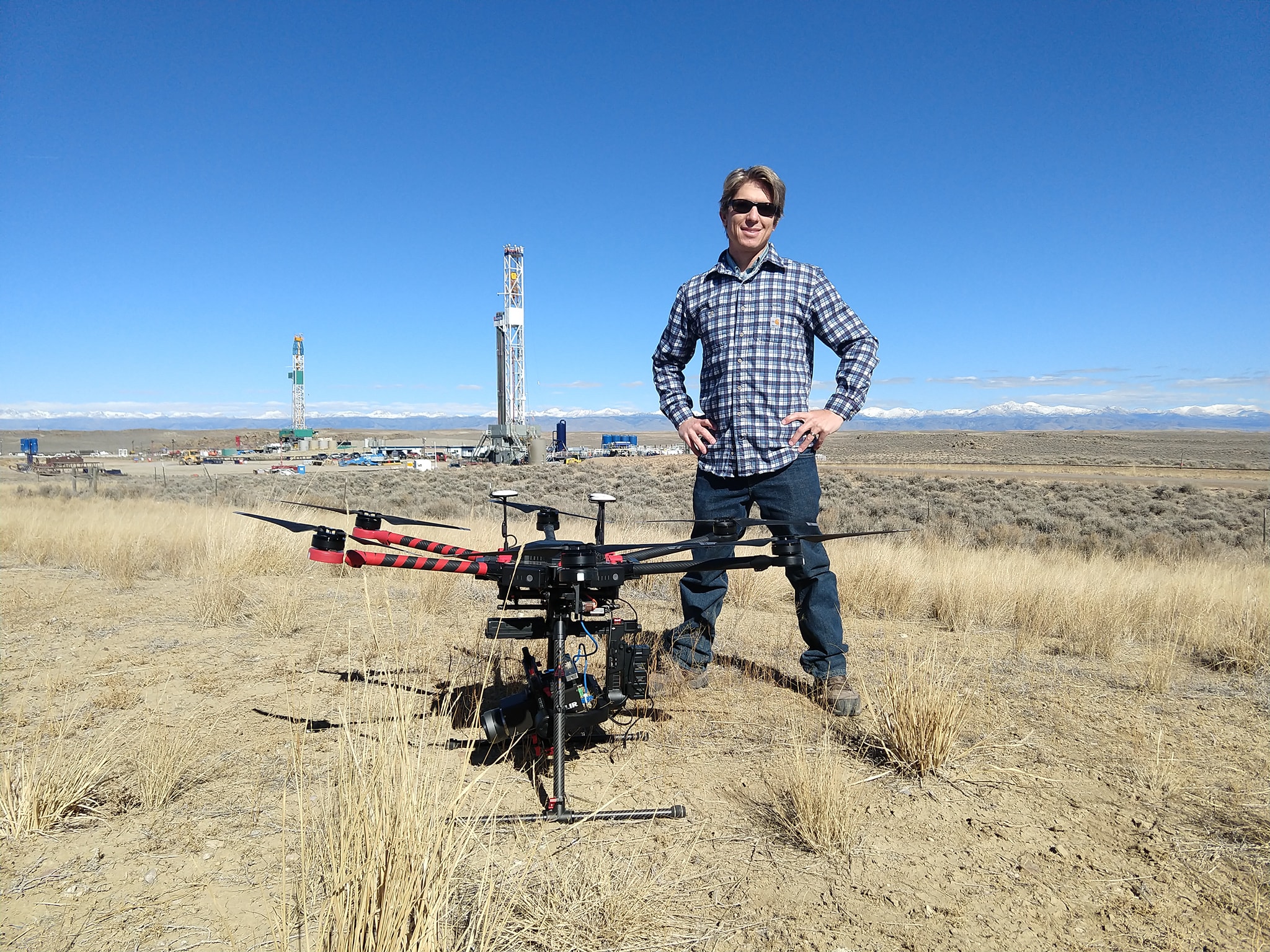 Eric Olsen is a problem solver. He’s also a thermographer, inventor, aircraft mechanic, drone pilot, entrepreneur, and a two-time college dropout. In all of these roles, Eric is/was searching for solutions.

Eric has held a fascination with aviation for much of his life. In fact, for years now he’s been putting together a Kitfox 7, a single-propeller airplane, by himself. He says spending time with his kids has slowed that down. While he was working as a ground-based thermographer for several years, that work and aviation ran parallel to each other, never intersecting. Then one day, he had the idea to strap a thermal camera to an RC tri-copter.

“I published a video on Youtube called ‘Aerial Thermal Imaging’ and it changed my life,” he said. “People saw that I was doing aerial point-of-view and that turned into animal counting and ‘Hey, could you help me find my dog?’ I was helping people find their dogs and DJI wasn’t even a company.”

This was long before drones were widely available to consumers: before Part 107 before you could buy a Phantom at Target. Eric had ordered some parts online, put together a proto-drone, and changed the course of his career.

In 2009, he founded Aerial Thermal Imaging, an international thermography service provider headquartered in Salt Lake City. They operate with five full-time employees in addition to contracted pilots and developers. Using his software development background, Eric helped to create MapTemp to display their data to clients.

The first actual job to come from his Youtube video was a serious one. A Chevron worker died after falling into a sinkhole that might have been generated by the company’s “heavy oil recovery,” a process by which they inject steam into the ground to liquefy deep oil deposits for extraction. The steam is supposed to stay underground, but some escapes to the top through cracks and fissures. That steam can be identified with thermal imaging.

“[They] called me and asked if I could make a thermal map for them,” Eric said. “I didn’t know how to do it at the time and it cost me way more than I thought it would cost me. That’s mostly what we do there—help them identify what we call a ‘Surface Thermal Expression.’”

Eric built a quadrocopter affixed with an infrared camera and began identifying potential areas of concern on the surface of oil fields. Oil and gas, and the energy sector in general, would become a significant portion of Aerial Thermal Imaging’s business.

Then, around five years ago, Eric found another problem to solve; a serious one. The Utah Department of Clean Air discovered abnormal and dangerous levels of formaldehyde in the air, threatening public health. Eric approached the agency with an unprecedented idea. He built a drone with a sensor that detects formaldehyde levels in the air and programmed it to generate a map to find the source of the gas. Unfortunately, the State has since put the project on hold, but Eric describes the drone they created as performing “really, really well.”

“That was another opportunity that just kind of fell into my lap,” he said. “I thought ‘Hey there’s a problem, and it sounds like a lot of fun to solve that problem. I’m going to try and help these guys.’”

That “sniffer drone” remains an ongoing project of his. The latest iteration of the drone is still within oil and gas. That six-rotor drone, which lives in the beta stage today, flies at speeds upwards of 60 mph detecting hydrocarbons in the air, primarily methane. These greenhouse gas emissions are a growing problem, and identifying leaks is a high priority of environmental agencies and energy companies.

Two projects, the innovative drone, and the airplane aren’t enough of course. Eric also has plans for a radio-frequency identification-tracking drone system which could be invaluable for finding lost people, pets, objects—anything you can fit that tiny RFID tag on. These innovative projects don’t get in the way of his work though. Eric continues to work as a drone operator, flying missions with Aerial Thermal Imaging, as well as jobs with DroneUp, like assessments for SITE Technologies. One such job involved an autonomous aerial survey that came with some challenges.

“[DroneUp] actually got me the hardest job I ever did,” he recalled, laughing. “It was a huge job, 200 acres, right next to Salt Lake International Airport with zero to 50-foot airspace clearance. I had to get permission from the FAA and get on the phone with DroneUp guys and they were so awesome to work with.”

So long as there are a healthy mix of knowledgeable pilots, researchers and software developers, Eric is confident in the future of the drone services industry. He sees youth interest and proficiency with drones—he once got badly beaten by a 14-year-old in an FPV drone race—but he has concerns about automation and a lack of basic math ability. Like others interviewed for Drone Jobs in the past, he thinks phones have been a blessing and a curse on the next generation in drones.

The year 2020 is certain to bring technological breakthroughs, policy revamps, and new issues for Eric and others like him to solve. Everywhere he looks, he thinks of how drones and other technology could fix everyday problems. No new policy, nor any breakthrough drone manufacturer or consumer trend, could get in the way of that.